So, I’ve decided to build a contributions tool in a similar style to the popular Huggle anti-vandalism tool.

Initially, I was asked to review the contribs of a specific user who was considering running for adminship. So, my lazy brain decided that I couldn’t be bothered reviewing contrib after contrib using tab after tab, so instead I wrote an app to load contribs, and load a diff for me.

I’ve still not started reviewing the contribs, but it’s pretty cool for an hour or two’s worth of coding and tapping the MediaWiki API 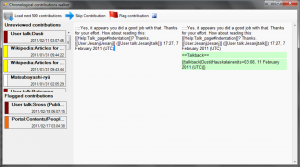 This is just an example setup going through some of Dusti’s contribs, randomly clicking skip and flag until I got a good screenshot, but I’m planning on adding an open in browser option, and an export flagged option too.

Eventually it’ll probably find it’s way into a subversion repo on this server somewhere (kinda surprised it hasn’t already actually), and I’ll probably release it for general use sooner or later. It’s pretty cool though for not much time developing it :)