For those unaware, XP (or experience points) in Minecraft are collected when the player takes certain actions, such as killing monsters, trading with villages, or smelting ore. XP can then be used to enchant or repair armour and tools. A good amount of XP is required – a high-level enchantment can require up to 1395 XP (the equivalent of killing over 280 zombies).  However, when you die, you lose (the vast majority of) the XP you’ve collected.

Plugins like this are not supported on vanilla Minecraft, which is why I normally rely on third-party Minecraft server software such as Bukkit or Spigot for my multiplayer servers.

XP banking plugins let you keep your XP safe by depositing the XP you have. Thus, when you die in-game, you only lose the XP you had not yet banked.

So, what exactly is XPKeeper?

XPKeeper is an XP banking plugin which is based around a sign which you interact with by either left- or right-clicking to either deposit or withdraw XP. The sign also displays your balance to the world, and also doesn’t particularly look nice. 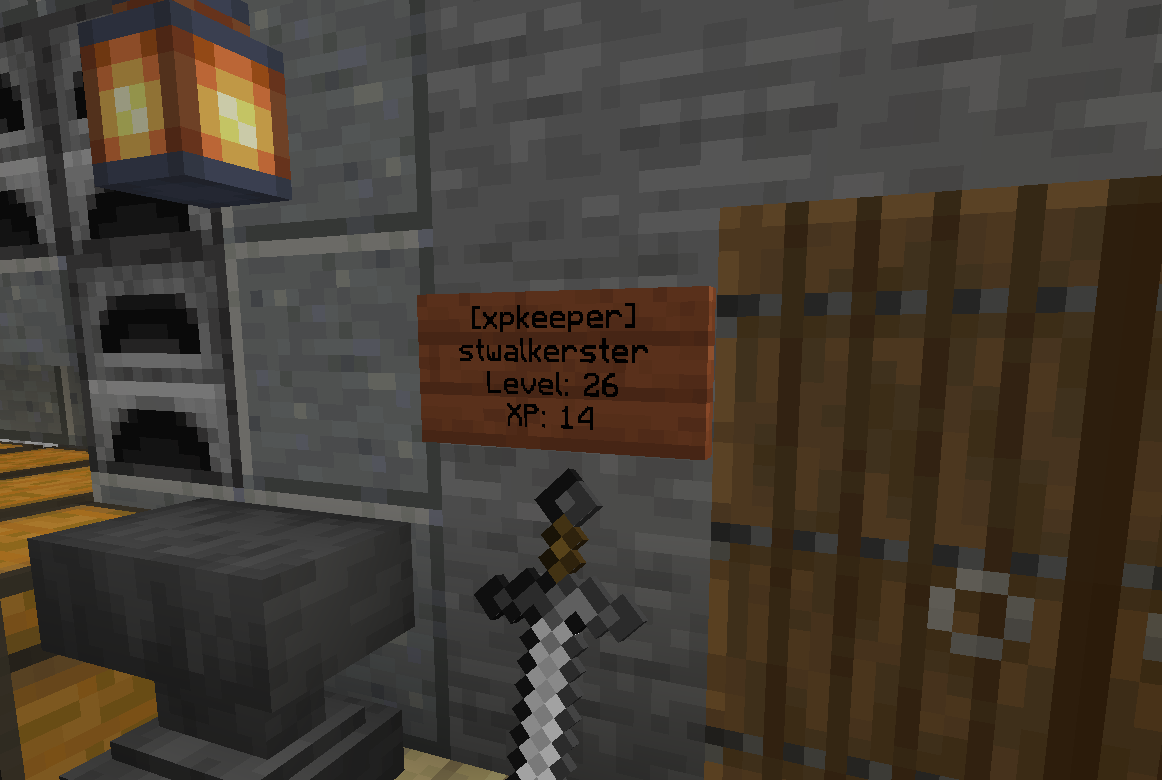 It’s a bit of a hacky solution to a problem, especially in modern Minecraft where tools like the scoreboard, command blocks, and data packs are a thing.

To be completely fair, this plugin has been around for ages – well before the introduction of things like data packs. According to it’s page on the Bukkit site, it was first released in September 2012, which would put it around the Minecraft 1.3 era – around the same time as emeralds and the Ender Chest were introduced. Command blocks wouldn’t even be introduced until Minecraft 1.4.

So, time for an update? Yes, though I will admit this is motivated not by the seniority or good looks of the XPKeeper plugin, but more towards my own growth as a more technical Minecraft player. Some of the more interesting farms I’ve been working on have made ample use of item mechanics, especially while working in the Nether and thus using techniques such as pistons, slime blocks, packed ice, and glazed terracotta to punt items around where I’d normally use a water stream.

Bukkit/Spigot’s optimisations excessively interfere with the mechanics of item movement, and this effectively destroys the farms I’ve been building, testing and perfecting on local testing worlds. The mechanics introduced by Spigot are unpredictable and thus generally non-conducive to building reliable farms.

Everything is done via these functions, and everything is stored as scoreboard objectives. This means you can even display everyone’s current balance in the scoreboard sidebar if you choose!

It also means there’s no prescribed user interface to the banking systems other than generating a redstone signal. You can build a large banking hall with pressure plates to trigger the data pack, or even have no visible indications that it even exists at all if you use mobile banking. 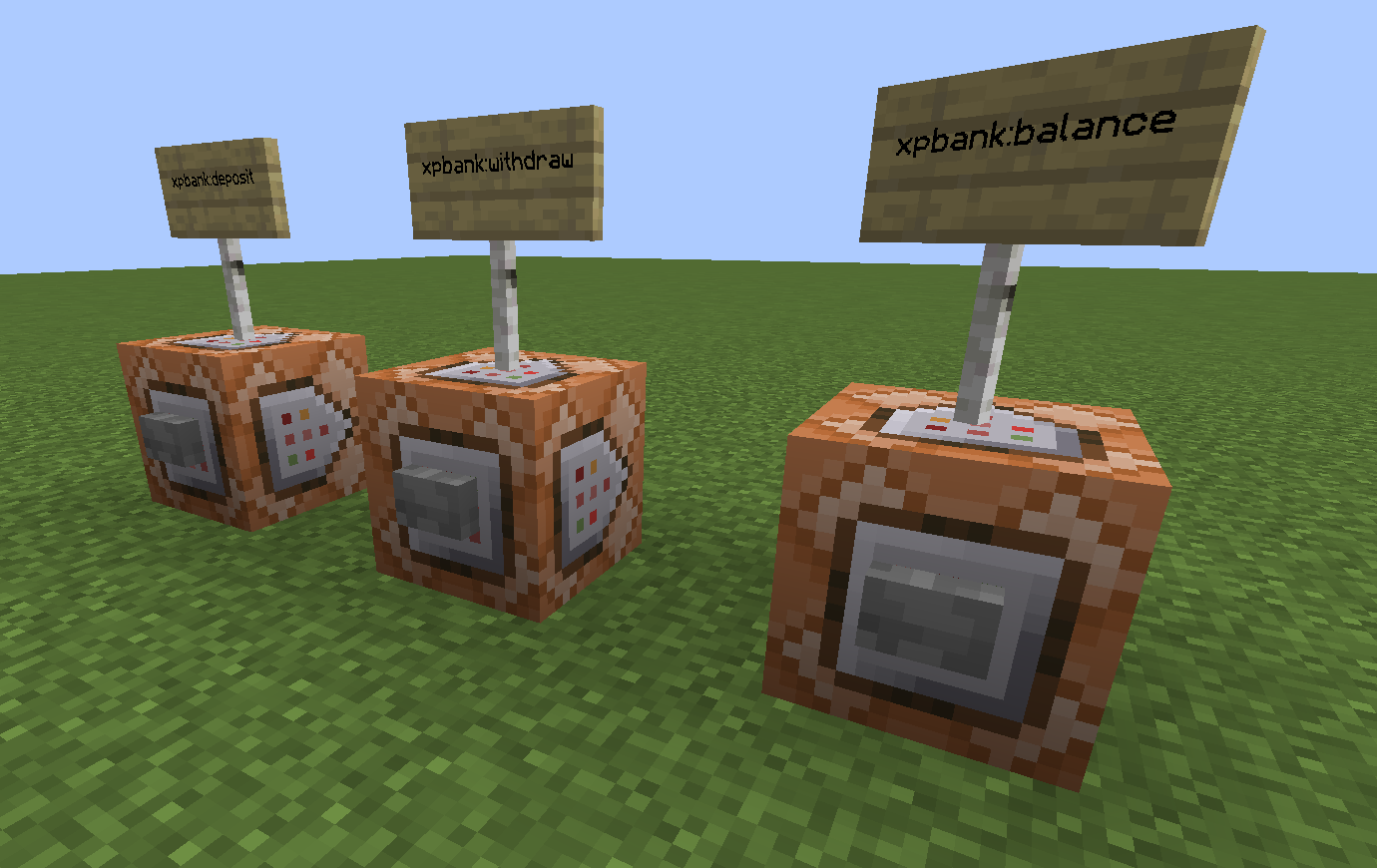 The most up-to-date instructions will be on the data pack’s GitHub repository – here: https://github.com/stwalkerster/minecraft-xpbank/blob/master/README.md

Once you’ve installed it, you can run /trigger xpb_deposit one or more times in the game chat to deposit your XP. By default, this will deposit all your XP points down to the next level, plus one level, but it can be configured to take more than one level at once if you prefer.

When you want to reclaim your XP, run /trigger xpb_withdraw one or more times to get your XP back in chunks.

To see your current balance, you can run /trigger xpb_balance.

For server operators, you can call the xpbank:balance, xpbank:deposit, and xpbank:withdraw functions from a command block with the execution context set to the relevant (presumably the nearest) player. For example, for a balance enquiry command block, you’d set the command to run to be execute as @p run function xpbank:balance.

Details on the relevant configuration settings can be found on the README linked above.

Definitely. What I’ve done so far is a working minimum viable product, and I’d definitely like to expand on it. I’ve not got any immediate plans to do work without real play testing, and I plan to get some play testing done on my current Minecraft multiplayer server.

On the horizon I can foresee a few enhancements though:

I’m perfectly happy to accept code changes, tweaks, new functionality, bugfixes, etc from others if you want to get involved.

The code in the data pack is licenced under the MIT licence, so you’re free to do what you want with it as long as you keep the copyright notice and thus credit to me intact.