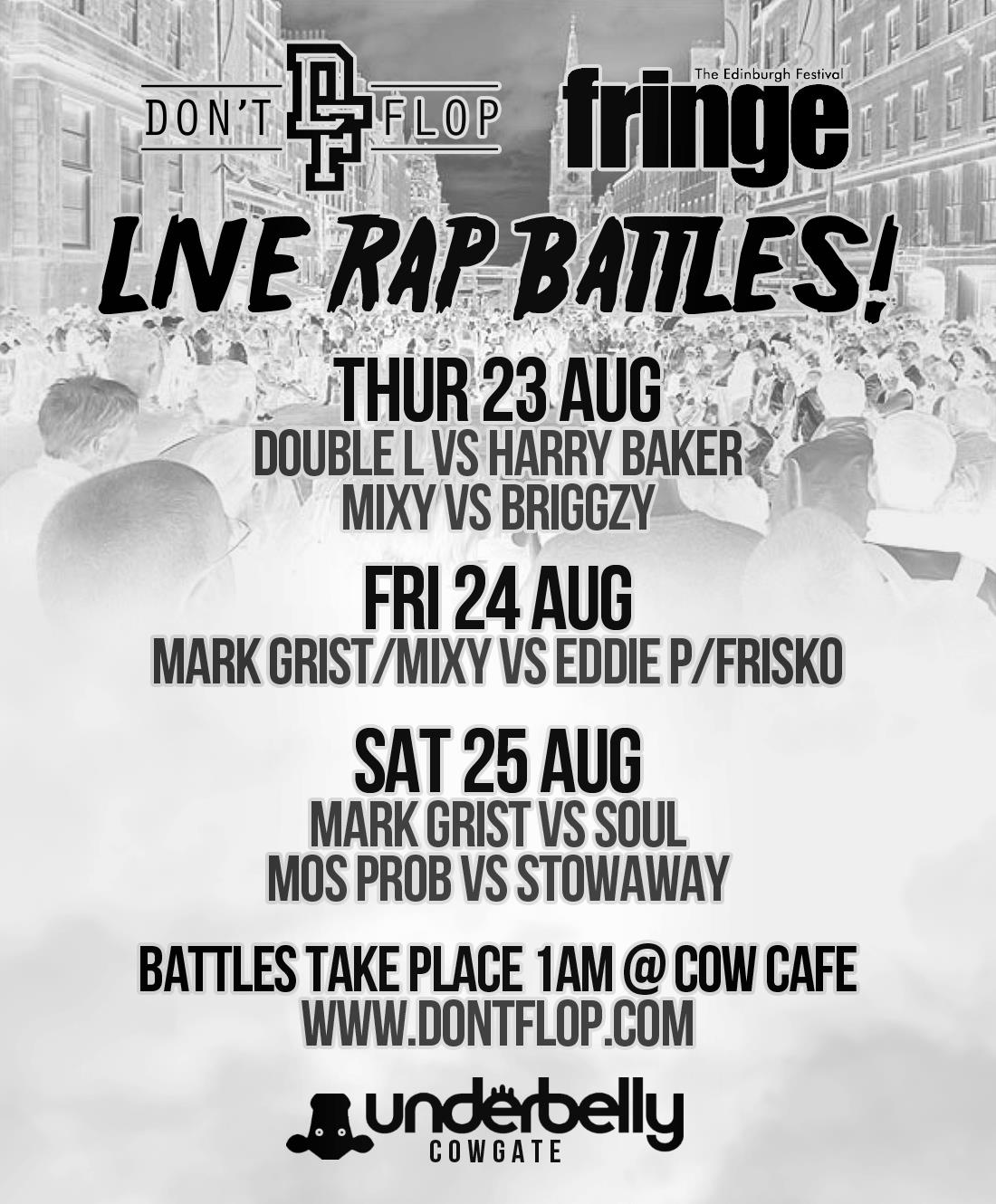 I’ve managed to get a job working at Underbelly in Edinburgh as tech crew during the Edinburgh Fringe – a month of thousands of performing arts shows at hundreds of venues.

I’ve not actually got my own venue, I’m working as a cover technician, so I get to hop around the different venues at Underbelly Cowgate and run those for a day or two at a time while others are off on holiday or otherwise. On the up-side it lets me see so many more shows. On the downside, I’ve no idea what’s needed for these shows – most have pretty decent notes so I have an idea, but not all! Some shows need opped too, and a couple of times I’ve been the only tech op for a show which I’ve never seen or heard about before. Usually though, if a show doesn’t have their own op, it’s usually a really straight-forward show to run (less than 10 cues, including audience in, bows, and audience out states).

So here’s a list of all the shows I’ve seen, set up for, or generally helped with:

It’s hard to believe it’s nearly over – it’s been amazing, and there’s only one day of shows left, then the strike (take-down / de-rig / etc). I’m definitely going to try to go back next year if I can, it’s definitely been worth it! I’ve met so many cool people, talented actors / directors / technicians, and the team I’ve been working with have been nothing short of amazing :)

‘I’ve seen people whose whole lives are about tryin’ to put food in their gobs and tryin’ not to get blown up… How d’yer go from that to watchin’ X Factor with a plate of Chinese on yer knee?’ Ray’s been f*cked up since Afghanistan but tonight at the pub, he’s going to win his ex-wife back. A darkly comic and acerbic look at the impact of war upon returning soldiers, developed with ex-servicemen prisoners and produced by Second Shot Productions, a social enterprise creating arts opportunities for ex-offenders. Winner – Old Vic New Voices Edinburgh Season.
— edfringe.com

The words ‘genius’, ‘unique’ and ‘the best’ are often misused. Ben Target is a comedian. He will be with you for 53 minutes. Leicester Mercury Comedian of the Year, 2011. ‘A hugely gifted prop comic whose shows are in equal parts delightful and unsettling’ (Guardian). ‘What a gem Target is… probably the most original, the most over-wrought and most audacious to be seen at the Fringe’ ***** (BroadwayBaby.com). ‘This is certainly an experience like no other’ ***** (ThreeWeeks). ‘Impressively funny’ (Scotsman).
— edfringe.com

An innovative new play incorporating a brilliant young eight-piece jazz band in a feisty and funny adventure set in a Gatsbyesque world of prohibition, intrigue and romance. Excitingly staged in a speakeasy in 1930s Princeton, with the audience at tables in the midst of the action recalling the same team’s sensational five star ‘Pick of the Fringe’ award-winning cabaret, we encounter gangsters and bootleggers, corrupt policemen, lovers and jazz artists, united in a maelstrom of sleazy excitement and glamour.
— edfringe.com

Set in a speakeasy, the Belly Laugh at Underbelly Cowgate is the perfect venue for some underground drinking, the atmosphere is great all throughout the show.

Disemboweling an English legend, Total Theatre Award nominees Milk Presents seek their manliness within. Pedal-powered brute force, elegant lyricism, and a feisty original score collide bringing you the story of St George. In a year of national pride and heroic athleticism, Milk Presents explore what it really means to be an Englishman. Follow George as he transcends boyhood, becoming the hero and defender of all he holds dear. Fusing live music and anarchic storytelling, this is a low-fi spectacular for adult audiences.
— edfringe.com

An impressive use of overhead projectors and bicycle powered birdies make up the lighting for this entire show, creating a surreal effect.